“OUR WIFE & OTHER STORIES” BOOK LAUNCH BY DR KAREN ARIBISALA,TAKES PLACE IN UNILAG

DR Karen King-Aribisala invites you to the launching of her book: OUR WIFE AND OTHER STORIES.

This great event takes places at The Afe Babalola Hall, The University of Lagos on Wednesday the 24th of July at 10.am on the dot. Do not miss it

You are all very welcome!!

Professor Karen King-Aribisala was educated in Guyana, Barbados, England, Nigeria, Wales and Italy. She is a professor of English in the Department of English, University of Lagos. She is a writer of fiction and has published several short stories and poems in journals such as Wasafiri, Presence Africaine, Moving Worlds and The Griot; her work has been anthologized.

She is the recipient of several local and international awards, grants fellowships and Artists Residencies, among them a James Mitchener Fellowship and Scholarship; British Council Awards; Ford Foundation Grant; Residencies at The MacDowell Colony, USA; The Camargo Foundation, France; The Djerassi Foundation, USA; Yaddo, USA; she represented Nigeria at ROMAPOESIA, in Italy as a poet; and in India at a Women’s Writing Seminar. 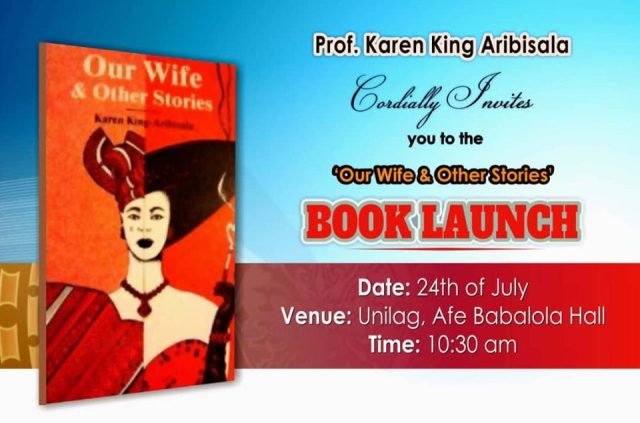