Glory! Glory!! Glory to God Almighty!!! While back home in Nigeria I got this wonderful Award Nomination from my compatriots in Germany. Selecting me out of thousands of Nigerians in Germany is simply a thing of immense Joy to me. This is the first time of such honor from my compatriots in Germany and this means a huge lot to me. Though I was addressed as President, instead of Chairman, I am nevertheless proud to share this with you. I humbly and joyfully accept this nomination and thank the Award Committee and the entire Executive of Nigerian Community Germany-München for this honor. This is no doubt another call to service and I pledge to continue to contribute my best to Nigerian Community in Germany and the Global Nigerian Diaspora Community. Thank you, folks, freiends and my wonderful family members for your support and prayers. Without you, this Nomination/Award will not be possible. Tanja, Fabian and Nelly, this Award is for you 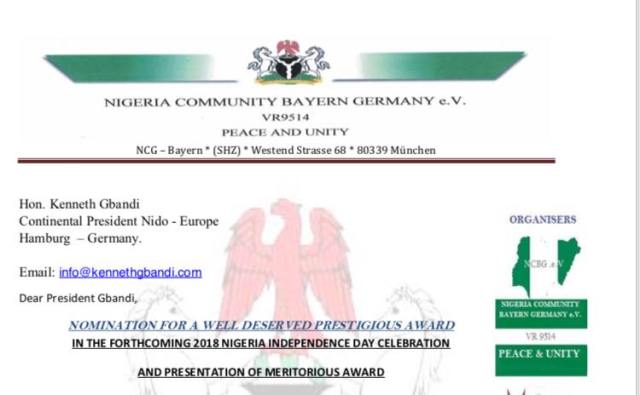