Chigbo Uzokwelu on the 17th of November 2018 was given a special award for his extraordinary and exemplary service to the Igbo community in the United Kingdom and also for propagating the advancement of the Igbo cultural heritage and norms all over the world.

He is an European citizen with Danish nationality as well as a Nigerian citizen of Igbo ethnicity. He is an accomplished gentleman, extremely polished and urbane, widely and vastly travelled, he has lived in several parts of Africa, Denmark, Sweden and presently in the United Kingdom.

A firm believer and advocate of Igbo emancipation, Chigbo founded the Igbo Union in Denmark and was also instrumental to founding Ndigbo Reading Association in the United Kingdom.

He trained as an attorney in Nigeria and was called to the Nigerian Bar as a solicitor and Advocate of the Supreme Court. He later migrated to Denmark in the mid-90s and did his Master’s degree in IT, with expertise on Electronic business.

He has worked in several world-class multinationals including DONG Energy, Microsoft, Rainmaker and Verizon. His best is outstanding and his second best is still legendary. He believes that determination is the key to success and whenever he assigns himself to a given task, he persists until he prevails.

Chigbo is not only an entrepreneur; he is also a veritable advocate of youth empowerment. At the moment he has several projects that occupy his time. One of them is the Maribo Foundation which is a non-profit organization that has been set up to promote the interests and well-being of the needy especially the youths in the ECOWAS sub-region of West Africa.

Maribo foundation strives to achieve this by donating books to schools and public libraries in target areas. Informed children tend to become better adults and may somehow be able to challenge themselves into assuming control of their lives and environments. Toys are also distributed to orphanages. To work effectively, Maribo Foundation relies on donations. Every donation counts, as no donation is too small. The donations go a long way to assist Maribo Foundation in achieving its objectives.

Chigbo Uzokwelu also runs a Wealth creation forum using the functionality of WhatsApp connectivity. The wealth creation forum is a dynamic platform where a group of dedicated professionals converge online from all over the world to brainstorm on and formulate strategies for wealth creation and sustainable development of Nigeria in particular and Africa in general.

The forum considers a given topic and explores how it can lead to prosperity, marshaling points for and against. It also explores a given small scale enterprise and finds plausible ways it can be used to achieve critical mass employment.

several proficient Igbo professionals from both Nigeria and the Diaspora who believe that it is time for the Igbo Nation to rise again in prosperity and enterprise using our human and material resources for the common purpose of bringing long overdue development, due recognition, due respect, and much needed unity to Igbo land.

Igbo Ekunie Initiative is strictly non-partisan and exists to foster the spirit of brotherhood and co-operation and promote greater networking, economic prosperity, and cultural heritage among the Igbo people all over the whole world.

Chigbo holds the traditional titles of Ebubedike 1 of Igboland, Eze Omenibo of Anaocha and the Rt Hon. Lord Chiggi of Maribo. 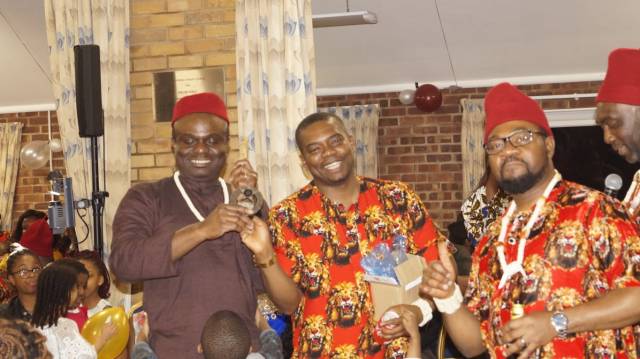