After three sold out shows, superlative praise about the 18th February event and popular demand, we are repeating our Black Panther day but with ONE HOUR of Q and A with a panel of experts to discuss the history, impact and future of this and other African superheroes. Feel free to cosplay (dress as your favourite superhero) or wear traditional clothing. Bring your friends and family along to watch this groundbreaking film about a Black superhero, warrior, king set in Africa. The 600 seat venue has an enormous screen and is 5 mins from Stepney Green tube on the District line. Our high powered panel for this celebratory and unique Sunday includes: Dr Michelle Asantewa, Dr Lez Henry, Terry Jervis and Tony Warner. Biography for each speaker below.

Terry Jervis has an extensive history in the comic-book business. Apart from being a collector, and helping to create the first British comic-book price guide, he has worked with industry giants Marvel and Warner/DC Comics and was based in Hollywood and London. He is in media production and is the CEO of Jervis Entertainment Media Ltd (JEM) http://www.jervismedia.com/about_us.php . In 2009 he initiated a social engagement programme with Marvel (using characters such as Spider-Man, The Incredible Hulk, Iron-Man, Fantastic Four and X-Men) to help create comics and integrated media which address literacy, social issues and instill values in young people. Terry was a keen supporter (and friend of) Reginald Hudlin who produced the animated 2010 Black Panther TV series. Terry is about to release his own black superhero series Spirit of the Pharaoh in graphic novel and animated versions.

Dr Michelle Asantewa holds a PhD in literature and co-presents the Amazing James Baldwin course http://bit.ly/2jjDN0u as well as the Black Women’s Resistance Leaders course http://bit.ly/2zQJJnY . She is an author of several fiction and factual books.She also lectures on African/Caribbean spiritual practices. Orishas as found in West Africa/Brazil as well ancient Egyptian goddesses feature in the Black Panther graphic novel stories as do women warriors.

Dr Lez Henry is a Senior Lecturer in Criminology at University of West London. An author and Social Anthropologist, he has written several books including Whiteness Made Simple . He has lectured at The African American Studies Department, Yale University,:Department of Humanities, Howard University,University of Gothenburg: Centre for Cultural Studies, Sweden.He is a keen Martial Artist and holds a Black Belt in Hung Kuen, Five Animals Shaolin Kung Fu and also practices Kyokushinkai Karate.

Tony Warner is the creator of African Superheroes Day http://bit.ly/2iVcHQc recently featured on BBC Affrca and founder of Black History Walks. He is also the presenter of movie breakdowns on Black Panther, Captain America, X Men, Superman and Call of Duty. 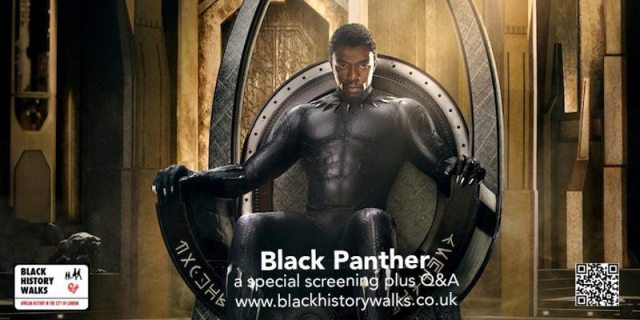 After the film you can hang around in the spacious cinema bar where you can have a bite and a drink and discuss the film in more detail In future we will also be hosting Black History of the Black Panther movie breakdown as well as repeating the highly popular African Superhero days Black Panther is directed by African-American, Ryan Coogler please check out his previous films Fruitvale Station and Creed.